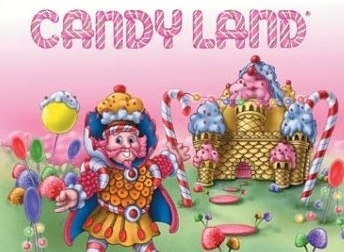 Recently I heard of an interesting game called Nomic. You don’t need any equipment — just some creative and indulgent friends. Today I got together with my creative brother-in-law and my creative oldest son to play Nomic Candyland.

We ended up with a pretty fun game:

We had fun. The final turn went something like, “I’ll play a red card; since I’m at level two I’ll make it a double-red. That jumps me over the robber so he can’t hurt me, and I land on the red player, damaging them down from three hitpoints to two. Finally I’ll shooting the red player with my candy cane, finishing him off to win the game.”

This entry was posted in Uncategorized. Bookmark the permalink.